On October 23 Munson Township honored the memory of Joe and Betty Koelliker. Long time residents of Geauga County, the Koellikers were responsible for preserving what is now called, Koelliker Fen, a special kind of wetland. The fen contains many types of rare species of plants and animals.

Early in the 1960s Joe and Betty discovered the rare beauty of this particular kind of wetland and sought  to purchase it and then preserve it. They later tranfered the title to the Cleveland Museum of Natural History for preservation in perpetuity.

Joe and Betty have passed away, but the fen they preserved is a living legacy and a Geauga County treasure.

In memory of the Koellikers’ foresight and conservation ethic,  Munson Township placed a commemorative plaque at the base of a newly planted red oak tree. It sits beside the Munson Town Hall. Various public officials spoke at the ceremony.  State Senator John Ecklund spoke fondly of Joe and Betty. Each of the Township trustees Andy Bushman, Irene McMullen, and Jim McCaskey offered their thanks for what the Koellikers had preserved.  A commendation written by State Representatives John Patterson and Sarah LaTourette was presented to Rachel Vanek, daughter of Betty and Joe, and resident of Munson Township with other family members were present.

Rachel spoke about the last year of her mother’s life. On one occasion they visited the fen. Her mother remarked how peaceful it was there.  That was what she and her husband wanted “A peaceful community.” So Munson has honored two people who preserved the land forever and worked to create that “peaceful community.”

Note: The Koelikker family was honored at Protect Geauga Parks Heroes of Conservation in 2015. 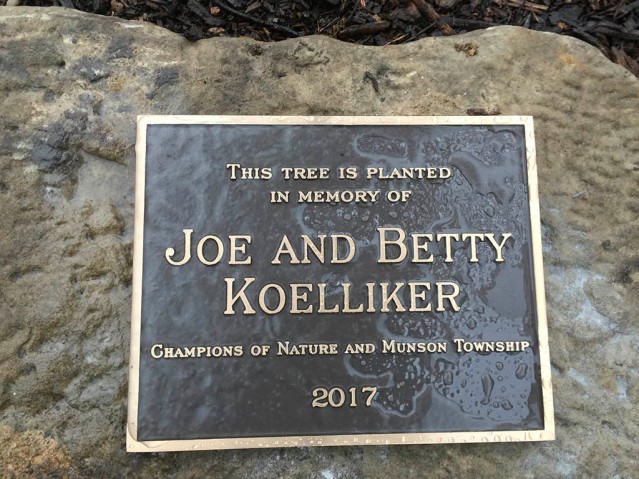