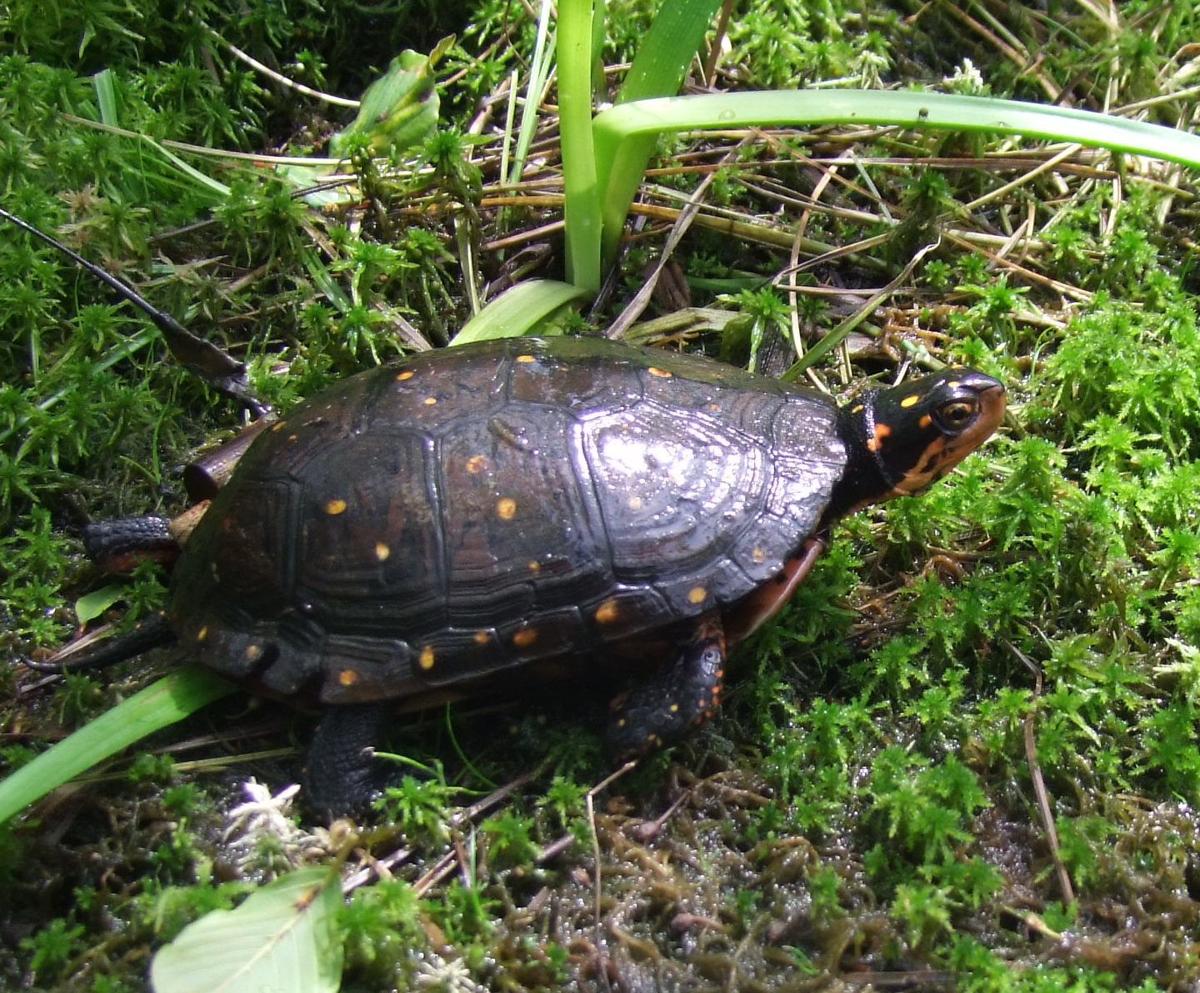 A female spotted turtle was released after collecting her eggs into a Geauga Park District park on Tuesday as part of an effort to help save the endangered species. 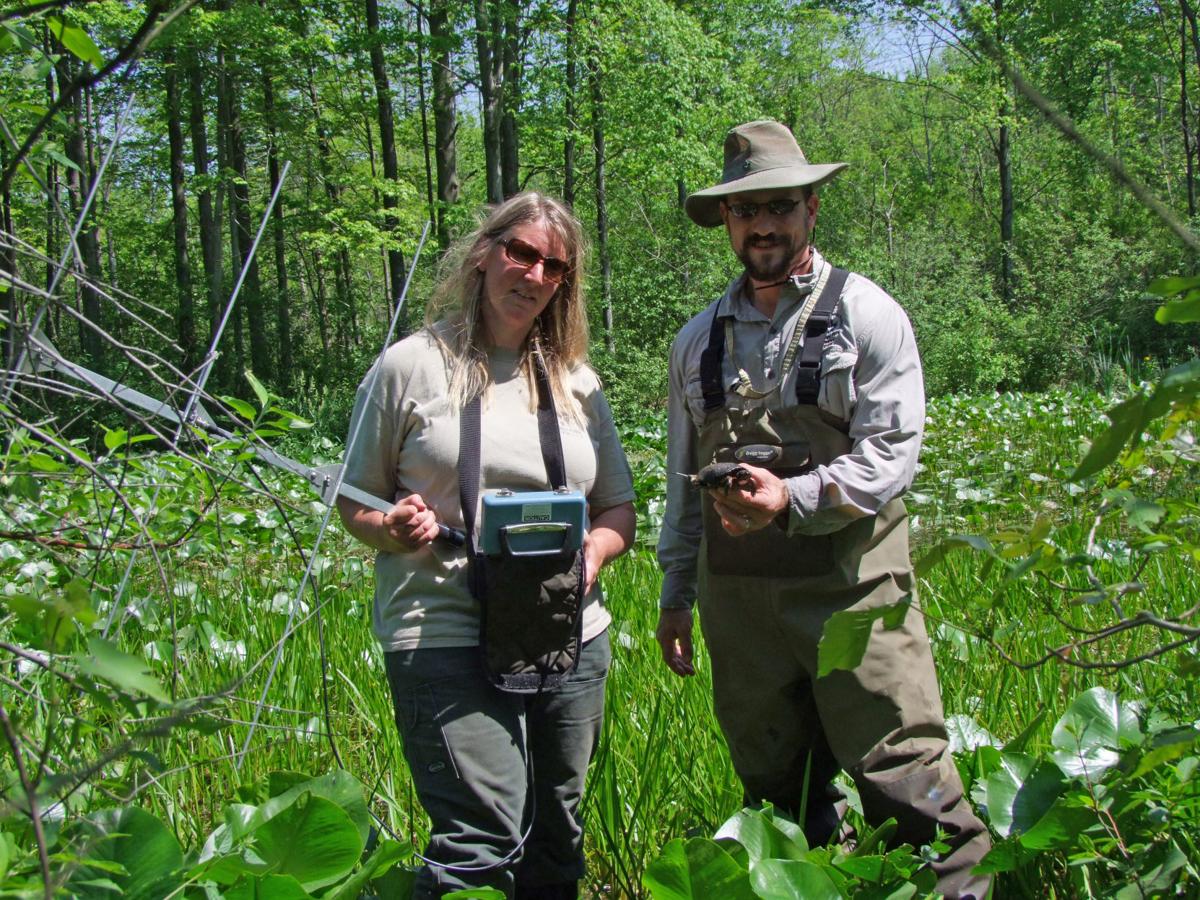 A spotted turtle was released into a Geauga Park District park on Tuesday as part of an effort to help save this endangered species.

The spotted turtle population has dramatically declined over the past 50 years, said park district biologist Paul Pira who has been actively involved in a program to save the reptiles. “They are endangered or threatened in most states in the Northeast and the Southeast areas of the U.S.,” he said. Their demise is due in a large part to wetland and habitat destruction, he said. These turtles live in upland forests, meadows and large ecosystems, he added.

Predators, like raccoons, are known to destroy the turtles’ nests and eat the eggs, he said, citing another reason for the population dip.

Mr. Pira noted that illegal collection by the pet trade, which often sells these turtles overseas, has substantially contributed to the decline in the natural population. “It is basically poaching,” he said.

“Spotted turtles are considered a threatened species in Ohio. They are in bad shape,” Mr. Pira said.

The spotted turtles have only small clutches of eggs with three to eight eggs in a season, and it takes a while for the females and males to reach reproductive age, he said.

Adult spotted turtles, sometimes referred to as the polka-dot turtle, are 4 inches to 5 inches across, and are jet black with bright yellow spots on their shells. They have orange throats, he said.

“It’s a complex situation,” Mr. Pira noted. “They are similar to the canary in the coal mine. They are good indicators of trouble with the ecosystem.” Their situation reflects that the forests and wetlands are not what they should be, he added.

“The bigger picture is that it is a moral question when you talk of preserving species. What gives us the right to say one is more important than the other?

“I’d like my kids to see a spotted turtle,” he said. “We should take care of our land to enjoy the natural history of Ohio. We owe it to the future generations to enjoy.”

Turtles in general are “cool,” he said. Some live more than 100 years, although that is not the case with the spotted turtle.

“We do have some spotted turtles that are 40 to 50 years old,” Mr. Pira said. “We have been catching them for over 20 years to study them and they were 20 years old back then.

“They are actually very docile,” he said. “They are very beautiful, handsome and appealing.

“I knew 10 years ago that their population was in trouble. They were older, and I never saw younger turtles,” he said. “And that’s a bad sign.”

That’s when he knew action was needed. “I didn’t want them to disappear before my eyes here in the Geauga Park District,” Mr. Pira noted.

He organized meetings, starting with the zoo and its head veterinarian. “We all agreed something had to be done,” Mr. Pira said of saving the spotted turtle.

They submitted a plan to the Ohio Department of Natural Resources, Division of Wildlife Service which gave its approval of the program, “Head Starting.” The goal is to increase the survivorship of the babies by collecting them and their eggs.

“We incubate the eggs at the zoo and the hatchlings are raised two to three years there until they are old enough to survive in the wild,” Mr. Pira said.

They have raised a female that was released Tuesday into one of the Geauga parks. He did not want to identify the location to discourage poaching.

The adult females are taken to the zoo the first week of June and X-rayed to determine if they have eggs. If they do, they are induced and they lay their eggs which are placed in an incubator.

When released, the adult turtles are fitted with very high frequency transmitters and identification chips, Mr. Pira said. They are tracked as they move about for a number of years.

Female turtles in the wild search for nesting areas in May, he said, mostly edge grass, meadows and wetlands. Sometimes the turtles wander onto the road and get hit by vehicles.

They dig their nest and lay their eggs. In about 11 weeks, the hatchlings of about 1-inch long emerge and head for wetlands in search of food and shelter. They prey on amphibian egg masses, tadpoles, worms, insects, fish and a little bit of everything including plant matter, the park biologist explained.

Mr. Pira is chairman of the program called “SPOTD” which means Save and Protect Ohio’s Turtle Diversity. “It is the only one in Ohio,” he said of the advisory group of conservationists attempting to save turtles in Northeast Ohio.

Right now the group is focused on the spotted turtle but plans to expand its efforts.

In 2012, the Geauga Park District and Cleveland zoo hatched three eggs and released them in 2015 in Geauga County. The group was the first to release spotted turtles into the wild in Ohio.

“Since then, the Cleveland Museum of Natural History and the Greater Cleveland Aquarium released six spotted turtles in a different county, Mr. Pira said.

In general, the turtle population is in decline throughout the world for the same reasons, he said. The Blanding’s turtle around the Lake Erie marshes and river inlets are in trouble as well.

“Our mission is to preserve the biodiversity, the native plants and animals for the future and to allow people to experience and appreciate them,” he concluded.