On Sunday, February 23rd, Dan Best made a remarkable presentation at the Conservation Conversation event sponsored by Protect Geauga Parks. It was our first public event of 2020 and it was a memorable event on many levels.

The program began with a welcome message from PGP President, Kathy Hanratty. Dave Partington then introduced Matt Rambo who is endorsed by PGP in his run for Probate/Juvenile Court Judge in Geauga County. Mr. Rambo received enthusiastic applause for his statement that he would appoint members to the Geauga Park District Board of Commissioners based on their knowledge of the mission of the park district and their commitment to conservation and fiscally responsible policies. He also stated that upon the appointment of a responsible and well-qualified board, he would step back and allow them to function independently.

Our featured speaker, Dan Best, then gave a very informative and entertaining presentation about his thirty-three year history as a naturalist with the Geauga Park District. He explained how the seasons of the year provided the context for much of the programming he and his associates developed over the years. He made a very strong case for the need to protect the natural resources of Geauga County because of its unique features including, wetlands, mature forest, rare and endangered species and the headwaters of three major rivers in the Lake Erie watershed.

Dan spoke about some of his favorite wildlife species including the Spotted Turtle, the Common Loon and the Prothonotary Warbler, a bird species he had an important hand in preserving in Geauga County. He also made an impassioned case for the value and importance of snakes. He pointed out several species of wildlife that he and his associates at the Geauga Park District had a hand in saving and re-introducing such as the Osprey, the Sandhill Crane and the River Otter.

The presentation was punctuated by songs that Dan has written to express his love of the natural environment, including the hit tune, “It Went the Otter Way.”

Dan capped off his presentation with an unsolicited statement about the current political direction of the park district and ended with a ringing endorsement of Matt Rambo for election as Probate/Juvenile Court Judge. The large crowd in attendance responded with a standing ovation. 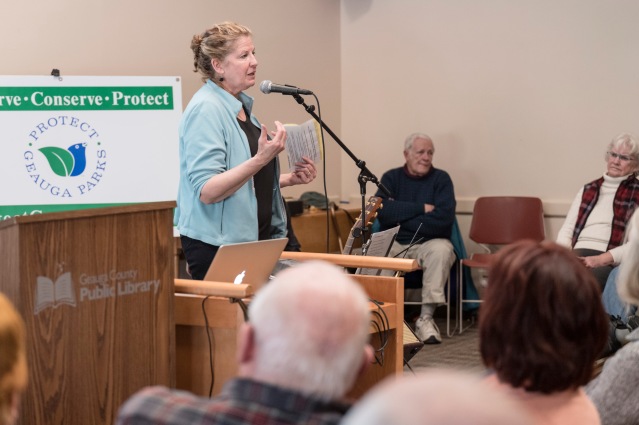 Matt Rambo, candidate for Probate/Juvenile Court Judge, introduced himself and gave a short address which included a commitment to, if elected, appoint qualified commissioners to oversee the Park District.

Naturalist, Dan Best, presented an overview of his 33-year career with the Geauga Park District. 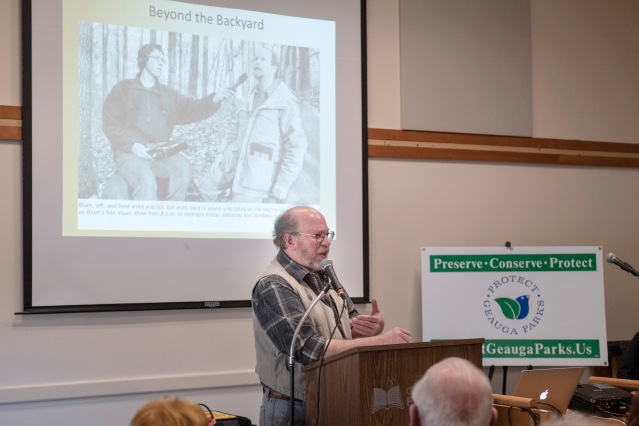 Dan describes his collaboration with WKSU radio in the series of short interviews titled “Beyond the Backyard.” Dan and WKSU radio host, Jim Blum, discussed the many ways we can encounter nature just a short walk from our homes here in Geauga County. The series aired weekly on WKSU from 1998 through 2002. 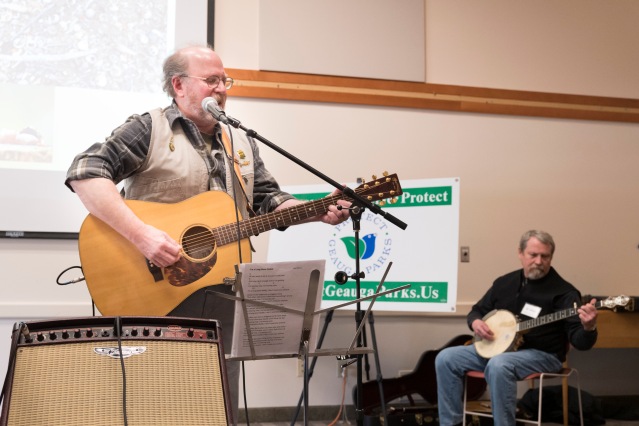 Dan added a musical element by performing several songs that he has written which were inspired by his experience as a naturalist, including “Maple Marabelle,” “Talking Chipmunk Blues,” “Massasauga Boogie” and “It Went the Otter Way.” 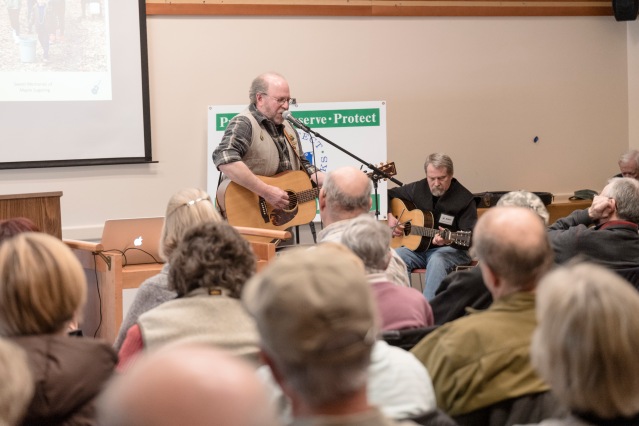 Among the more passionate moments was Dan’s description of the importance of snakes in the natural environment.

The event came to a close with a rousing ovation—a tribute to Dan’s wonderful presentation and also his over three decades of service to the residents of Geauga County.

Protect Geauga Parks is a 501(c)4  non-profit corporation
This communication is not authorized by any candidate, political party or campaign committee.